The VŠE crew finished sixth at the University Eights

University Eights races were held as part of the Mayor’s Day, a traditional rowing weekend. On Friday, June 7, the VŠE crew joined the traditional favourites from ČVUT (Czech Technical University in Prague), UK (Charles University) and Palestra, at the start of the race. A great performance in the heats ensured participation in the B finals, which they won. Overall, the crew of students and graduates of the University of Economics, Prague finished sixth at the prestigious Vltava race.

“As we have the eighth problem of finding 9 rowers every year, this year our crew prepared individually. For this reason, it was uncertain how fast we would go and how the crew would sit in the boat,” said Tomáš Mlčoch after the race. “In the end, the composition of our crew turned out to be perfect. We had an experienced rower Edu Bezděka, who is a junior world champion, although lately he has not been so active. His pace was easily adapted by the other crew members and they flew like the wind. The crew consisted of 3 graduates and 6 students (the maximum number of graduates allowed according to the rules). Kristina Draškovič, also joined the men’s team and fought bravely with a higher pace than she was used to,” said Mr. Mlčoch.

In the heat, the VŠE crew went head to head against two strong crews, UK and Brno University of Technology, and advanced to the B finals. “In the finals we chose the same tactics as in the heat – start off with all our power and then find out what to do next. Thanks to the fast start, after 200m, we were leading by almost 1 length of the boat (about 3 seconds), however the swiss crew from Zurich were fighting hard for the lead and throughout the race were approaching dangerously. The VŠE crew was slightly exhausted after the heat, but luckily we managed to keep the lead and we won with a 1 second lead,” explained Tomáš Mlčoch. At the finish line, enthusiasm and joy prevailed among the members of the VŠE crew, the race was exhausting, and everyone reached physical limits.

We are thankful the VŠE crew for their excellent representation! We also thank the rowing club VK Smíchov for the rented boats and oars.

The ČVUT crew defended first place in the male category. Representatives from Charles University won in the female category.

The VŠE crews have been participating in the University Eight since the first year in 2011. Details about the race can be found at osmy.cz 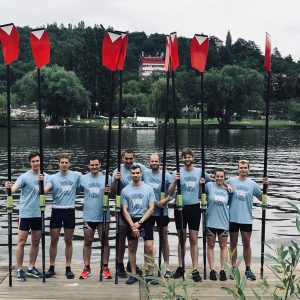 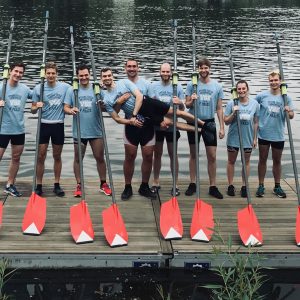 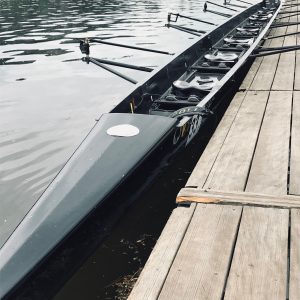 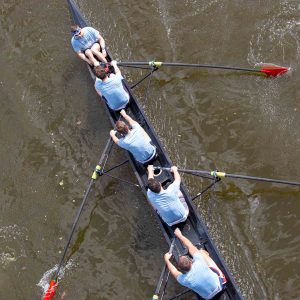