Professor Emeritus of Harvard Business School Robert Samuel Kaplan will receive an honorary doctorate on September 23, 2021 at the Prague University of Economics and Business. Professor Kaplan is the world’s leading expert in strategic management, risk management and managerial accounting. In addition to academic awards, his work is characterized by how widely and successfully his methods of strategic management have been implemented in companies around the world, including the Czech Republic.

The University is awarding an honorary doctorate to particularly important representatives of Czech and world science and practice, especially economics. The Scientific Board of the University decided to award the honorary title “Doctor oeconomiae honoris causa” to Professor Kaplan on the proposal of the Scientific Board of the Faculty of Finance and Accounting in November 2019. Due to anti-epidemic measures, the ceremony can take place only now.

Robert S. Kaplan is best known around the world for his Balanced Scorecard Method, developed with David P. Norton and first published in the 1992 Harvard Business Review, and the Time-Driven Activity-Based Costing Method, which he developed with Steven R. Anderson. His books have been translated into more than twenty-four languages ​​(including Czech), his articles have been published in a number of prestigious world professional journals and are widely cited.

The handover of the honorary doctorate will take place in Vencovský auditorium on Thursday, September 23 from 4 pm. Those interested in participating in the ceremony can register via the electronic form. For more information contact Mrs. Marcela Zárybnická Žárová (zarova@vse.cz). 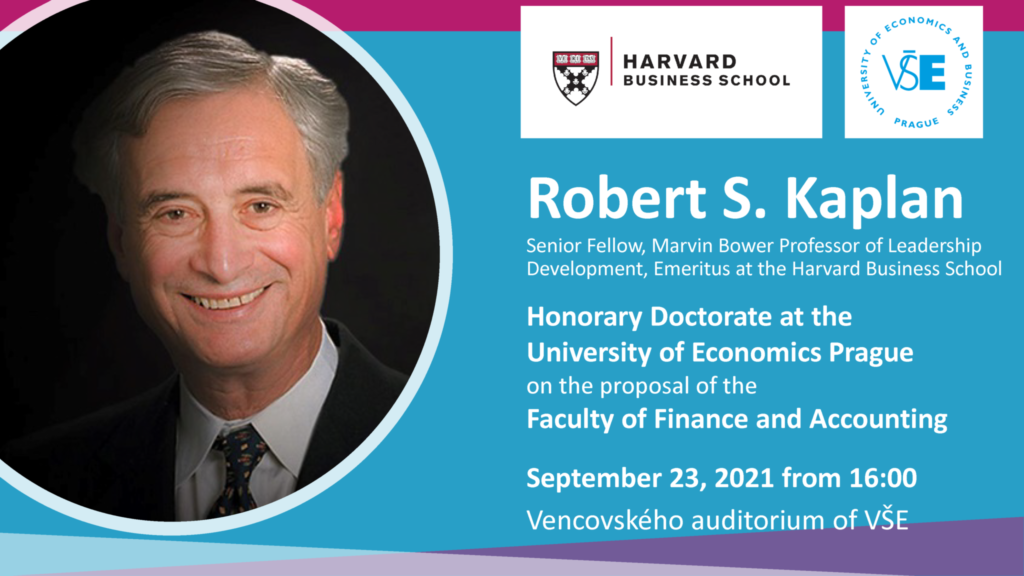 About Robert S. Kaplan and his work

Robert S. Kaplan born May 2, 1940, in New York, USA Prof. Kaplan obtained his BS in Electrical Engineering at the Massachusetts Institute of Technology, where he also obtained his MS in Electrical Engineering. For his graduate studies, he moved to Cornell University, where he obtained his PhD in Operations Research. After his graduation, Kaplan started his academic career at Tepper School of Business at Carnegie-Mellon University in 1968 and served as its dean from 1977 to 1983. In 1984 Kaplan joined the Harvard Business School, where he was appointed Marvin Bower Professor of Leadership Development. In 2006, Kaplan was named to the Accounting Hall of Fame. In the same year, he also received the Lifetime Contribution Award from the Management Accounting Section of the American Accounting Association. Since the 1990s he has been awarded honorary doctorates by the University of Stuttgart in 1994, the University of Lodz in 2006, and the University of Waterloo in 2008.

Prof. Kaplan and David P. Norton created the Balanced Scorecard, a means of linking a company’s current actions to its long-term goals. Kaplan and Norton introduced the balanced scorecard method in 1992 Harvard Business Review article, The Balanced Scorecard: Measures That Drive Performance. This method has been endorsed by companies from every industry and corner of the world as evidenced by the Palladium Balanced Scorecard Hall of Fame for Executing Strategy and Bain & Company’s Management Tools and Trends report.

Robert S. Kaplan and Steven R. Anderson co-developed Time-Driven Activity-Based Costing (or TDABC), a methodology to truly understand costs, to help companies get on a simpler and more powerful path to higher profits. Most recently, this methodology is being applied to healthcare, to measure health care delivery costs across an entire care continuum, at the medical condition level.